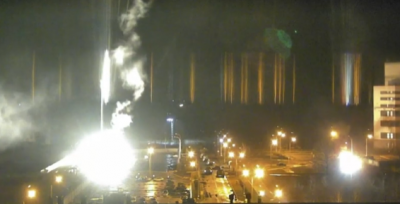 Update March 4, 2022: The fire has been extinguished and the containment vessel has not been breached, according to Ukrainian authorities.

March 3, 2022 (San Diego) – "As a result of continuous enemy shelling of buildings and units of the largest nuclear power plant in Europe, the Zaporizhzhia nuclear power plant is on fire,"  Dmytro Orlov, mayor of Enerhodar, a city in southern Ukraine, posted tonight on  hisTelegram channel. The facility contains six nuclear reactors.

The nuclear facility is the site where Ukrainian citizens have gathered in recent days forming a human shield in an effort to prevent Russian troops from capturing the nuclear plant.