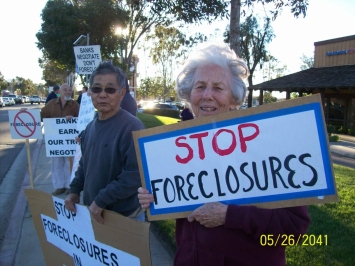 “There is an urgency to this.”—Assemblymember Monique Limon, who fears many Californians may lose their homes or become homeless if AB 1436, which she coauthored, is not approved

File photo:  Protest to stop foreclosures during the last recession

August 17, 2020 (San Diego) – To date, efforts to save homeowners and landlords from foreclosure, as well as extend eviction protections for renters in California have failed.  With the Legislature poised to adjourn soon and federal benefits expiring, a bill being heard tomorrow morning may be the last chance to prevent a wave of evictions and foreclosures. At 9:00 a.m. Aug. 18, Assembly Bill 1436 will be heard in the state Senate Judiciary Committee.

The bill’s coauthor, Assemblymember Monique Limon, says the banking industry has been heavily lobbying members to oppose the measure. Assemblymember Limon previously introduced AB 2501 to prevent foreclosures, but the measure was defeated due to financial industry lobbyists.