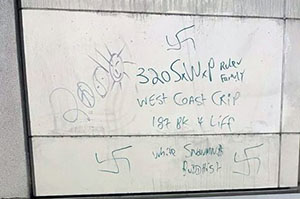 March 14, 2021 (San Diego) - Earlier this week, an unidentified resident advisor at South Campus Plaza North, a large dormitory serving hundreds of students at San Diego State University, found scrawled on the exterior of the building three swastikas and coded messages often associated with white supremacist philosophy.  She immediately got some poster board to cover the offensive messaging, and drew hearts upon the poster board along with the message “Spread Love.”  After campus police were called to the scene and photographs taken of the offending material as part of an ongoing investigation, the antisemitic message was eliminated.