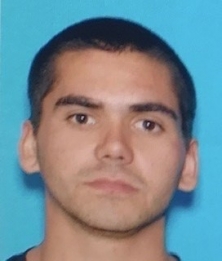 January 8, 2020 (San Diego) – The California Highway Patrol warns that a suspect accused of killing a woman in an accident near Temecula, then fleeing the scene and later escaping from law enforcement may be in the San Diego area. Antone Wayne Bayard, 23, of Anza is also accused of injuring two CHP officers during his escape.

On Twitter, the CHP posted, “Bayard is believed to be in the Temecula/San Diego area with plans to flee to Mexico.”