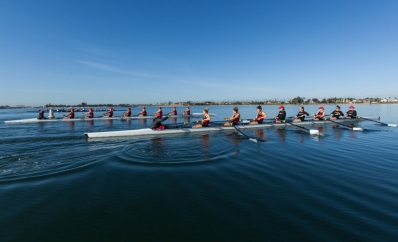 “We are very happy to add Dave Cormier to the coaching staff,” Zack said. “He has an excellent technical eye and will help the team gain a lot of speed. Like everybody else associated with the team, he is very enthusiastic about the future of the program and excited to play an important role in the student-athletes’ pursuit of excellence on and off the water.”

During his time at Westford Community Rowing, Cormier oversaw all aspects of the town’s rowing programs, including the competitive junior (high school rowers), competitive masters, recreational and instructional programs. Under his leadership, the middle school group doubled in size and the adult program tripled in members. As the head coach of the Westford women’s lightweight four, the team placed 10th at the 2015 USRowing Youth National Championships and became the program’s first national-level crew.

Prior to his time at Westford, Cormier was the men’s head rowing coach and boathouse coordinator at his alma mater, University of Massachusetts Lowell, from 2013-15, where he helped expand the UMass Lowell men’s and women’s teams from 30 to 75 student-athletes. As the boathouse coordinator, he managed a facility that hosted three rowing programs, a kayak center, an events center and the Merrimack River National Parks Service.

Cormier first gained coaching experience from 2012-13 with the Westford-Littleton Community Crew, for whom he served as an assistant coach. His novice women’s eight medaled at the USRowing Northeast Regional Championships.

As a collegian, Cormier rowed for four years at his alma mater, UMass-Lowell, where he served as a team captain for two years and was a bronze medalist at the New England Rowing Championships. Cormier has since rowed with the Merrimack River Rowing Association and has won many gold medals at regional regattas.