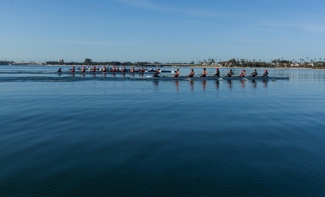 October 3, 2017 (San Diego) - San Diego State head rowing coach Bill Zack announced this week his team’s schedule for the 2017-18 season, which kicks off with two fall events before the Aztecs hit the water for regular season races in the spring of 2018.

The Scarlet and Black have three scrimmages on the schedule for February 2018, first against Minnesota on Feb. 3, a four-team scrimmage with Orange Coast College, UC San Diego and USD on Feb. 17, and finally one last scrimmage against Loyola Marymount on Feb. 24. All three February scrimmages will take place on Mission Bay.

The Aztecs will officially kick off the regular season with races at UCLA with Stanford on March 3 in Marina del Rey, Calif. Two weeks later, SDSU travels to Gold River, Calif., for the Hornet Invitational, hosted by Sacramento State, on March 18-19.

Following its Northern California trip, the team returns to America’s Finest City for the San Diego Crew Classic on March 24-25 on Mission Bay.

SDSU enters head-to-head competition twice in April, first facing LMU on April 14 in Marina del Rey, then against UCSD on April 20 in Chula Vista. The team then welcomes UC Santa Barbara to Mission Bay for a scrimmage on April 21.

The Aztecs are set for a return to Gold River to compete in the Western intercollegiate Rowing Association (WIRA) Championships on April 28-29, and finish the season at the American Athletic Conference Championships on May 12 in Camden, N.J.