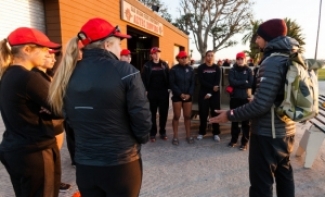 Avery, the seven seat, and Danvers, the two, were rewarded for the varsity eight’s second-place showing on Lake Natoma. The 2015 “Newcomer of the Year,” Avery is finishing her junior year and third varsity level season. Danvers, a junior from North Vancouver, B.C., is also a third-year varsity rower and has raced in the V8 with Avery in each spring outing this season.

Hepner was a member of the second varsity eight crew that took first place at the WIRA Championships. A native of Orange, Calif., the sophomore raced in the 2V8’s third seat and has lettered in each of her seasons on the Mesa. Keane, the stroke for the second-place finishing varsity four boat, is concluding her freshman year and first varsity season at SDSU.

The Aztec compete in the final race of the season this weekend at the American Athletic Conference Championships in Sarasota, Fla. Races are set to begin at 11 a.m. ET/8 a.m. PT on Saturday, May 13, at Nathan Benderson Park. A link to live coverage of the championships will be available on GoAztecs.com.