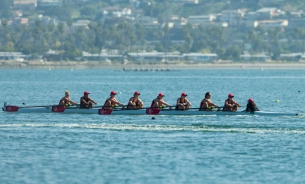 SDSU defeats UCSD 13-0 in final dual of the season

April 21, 2017 (San Diego) - The San Diego State rowing team competed in its final dual of the season this morning, where the Aztecs finished ahead of UC San Diego, 13-0, to claim the Patty Wyatt Perpetual Trophy in its inaugural year. SDSU entered three eight boats and two four boats in the dual against the Tritons.

SDSU crews got off to early leads in each of its five races and kept UCSD on its toes with the early speed. SDSU was able to retain its commanding leads in each race through 500 meters to hold on to and expand its distance through the end of the races.

"All 37 of the women who represented SDSU this morning rowed well and rowed aggressively," said head rowing coach Bill Zack. "The team is honored to be the inaugural winner of the Patty Wyatt Perpetual Trophy. Both teams truly value what Patty Wyatt, an SDSU alum, contributed to the sport of rowing in San Diego as well as her contributions as venue manager for the Olympic Games in Los Angeles. It is thanks to people like Patty Wyatt, and the support of both universities, that our student-athletes can enjoy and benefit from their involvement in the great sport of rowing. We are looking forward to tomorrow’s race practice with UC Santa Barbara and then heading north the following weekend to the WIRA Championships."

Up next, the SDSU rowing team returns to Mission Bay tomorrow morning, April 22, for a scrimmage and joint practice against UC Santa Barbara. Racing begins at 7 a.m. The best place for spectators to catch the scrimmage is on the path adjacent to the Sea World Channel, which is accessible from South Shores Park. Following this weekend's scrimmage, the Aztecs head to the Western Intercollegiate Rowing Association Championships on April 29-30, in Gold River, Calif., followed by the American Athletic Conference Championships on Saturday, May 13, in Sarasota, Fla.