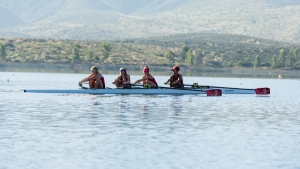 “Two golds and a bronze – it was a great Sunday on Lake Natoma,” head rowing coach Bill Zack said. “The strength and depth of the team was on full display and was noticed by the race announcers, the crowd and the awesome group of Aztec family and friends on the shore. The team will continue to work to improve over the next three weeks leading up to the conference championship.”

After putting up a first-place time in Saturday’s second heat, the varsity eight crew competed from the second lane in the Women’s 8+ final at 8:30 a.m. on Sunday morning, where they ultimately claimed bronze medals with a final time of 6:40.899. The Stanford Lightweight crew pulled up to take first with a time of 6:32.577 and were followed by USD, who finished with a less than half a boat length over the Aztecs in 6:37.957. Trailing the Scarlet and Black were AAC foe Sacramento State (6:43.575), Loyola Marymount (6:49.093) and University of Portland (6:51.779).

“We started with a lead on all the other teams,” sophomore coxswain Hannah Broadland said following the V8 race. “Stanford lightweights pulled up even by the first 300 meters, but we held our lead on USD. At about 750 meters to go, USD started to walk back up on us and got a four seat lead. We finished in third overall, ahead of Sac State in fourth.”

Up next, the San Diego State rowing squad prepares for The American Conference Championships, which are set for Sunday, May 19 in Oklahoma City, Okla.