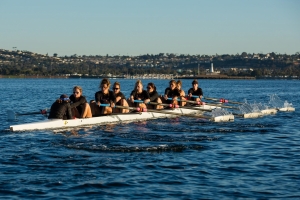 October 13, 2018 (San Diego) - The San Diego State rowing team dominated with wins in its three events on Saturday at the 18th annual Row for the Cure, hosted by UC San Diego. The Aztecs topped their opponents in the open eight, novice eight and open four out on Mission Bay.

The Aztecs created an enormous gap between their and USD’s novice eight crews in the 7:50 a.m. race, with SDSU clocking in just shy of 14 minutes with a time of 13:58. The Toreros finished minutes later, recording a time of 19:17.

SDSU rounds out fall competition with the San Diego Fall Classic on Sunday, Nov. 11 at 7:30 a.m. on Mission Bay.