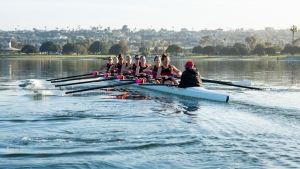 In the first event of the day, the Aztecs third varsity eight built up a significant lead over the UCSD novice eight, ultimately finishing the course with a time of 7:07.8, with more than a 30-second margin over the Tritons (7:38.5). The Scarlet and Black second varsity eight boat finished in a similar fashion in the 8 a.m. event, clocking in at 6:53.0 while the UCSD 2V8 squad finished in 7:25.0.

The varsity four crews competed at 8:15 a.m., where the Aztec crew, who raced in the Duke Robinson boat, finished in 7:47.0, nine seconds ahead of UCSD (7:56.0). The final event of the day, the varsity eight, ended with yet another San Diego State victory as the Aztecs finished in 6:48.0, leading the Tritons by eight and a half seconds (6:56.5).

“In the top eight, we went out and had a very organized and smooth race,” sophomore coxswain Hannah Broadland said. “We encountered a little bit of head wind, but still managed to pull a time we felt confident in, and are excited to continue to improve.”

Up next, SDSU prepares for the Western Intercollegiate Rowing Association (WIRA) Championships, which are set for Saturday and Sunday, April 27-28, on Lake Natoma in Gold River, Calif.