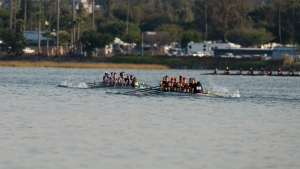 The Aztecs began the morning with their third varsity eight event, in which the Bruins entered both a 3V8 crew and their third varsity four boat, alongside SDSU’s 3V8 team. Both of UCLA’s vessels finished ahead of the Aztecs, first the UCLA 3V8 (6:59.6) and then the 3V4 (7:11.7), which edged the Scarlet and Black by hundredths of a second (7:11.75).

In the varsity four event, the Aztecs finished 17 seconds behind UCLA’s time of 7:27.2, with their time of 7:44.2. At the top of the 10 o’clock hour, the second varsity eight crews got underway, and the Aztecs pulled off a tight race with the Bruins. UCLA eventually finished in 6:48.3, and SDSU trailed by less than one second with a final time of 6:49.1.

UCLA was also able to capture a faster finish in the final event of the morning, the varsity eight, when its crew crossed the finish line in 6:38.9, leading the Aztecs by just over 18 seconds with their finish time of 6:57.62.

The Aztecs look to improve upon their times in practice next week as they prepare for the annual trip to Gold River, California for the Hornet Invitational. The two-day event, hosted by Sacramento State, is set for Saturday and Sunday, March 16-17 and hosts crews from SDSU, Sac State, Kansas State and Saint Mary’s.