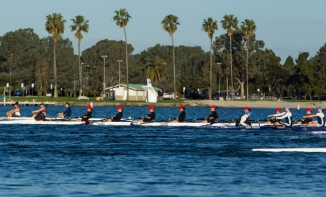 SDSU competes in first event of the season

“Good results all around, but more important was the cause,” head coach Bill Zack said. “The team wore pink hair ties in honor of the mom of one of our seniors who is a breast cancer survivor.”

In the team’s final event of the morning, SDSU freshman Anastasia Vontzou clocked in at 16 minutes flat in the singles category at 9:20 a.m.

Following this morning’s races, the team christened a four boat in honor of late San Diego rowing legend, Duke Robinson, who made major contributions to the local, national and international rowing scene for decades.

“The christening ceremony was really nice,” said Zack. “Duke’s sister told the team that when she was their age, all that SDSU women could do was join Shell and Oar, the support group for men’s rowing. Now, thanks to Duke and others, we are in year 20 as a varsity sport with lots of hard working and talented women rowers.”

SDSU will spend the next few weeks practicing for its final fall event, the San Diego Fall Classic, which is set for Sunday, Nov. 12, at 7:30 a.m. on Mission Bay.