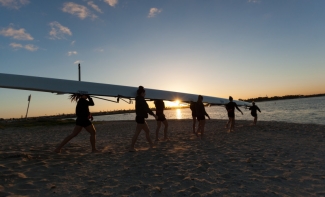 Incoming freshman Hannah Broadland served as the coxswain for the Capital Crew that won the national championship in the women’s youth four final in 7:10.774. A native of Rancho Cordova, Calif., Broadland rowed all four years of high school as Rio American HS’s coxswain. As a member of the Capital Crew Junior Rowing Program, she also served as the coxswain for the Capital Crew junior varsity eight team that placed third at the 2016 USRowing Southwest Youth Championships. Part of the Row West Racing Camp in summer 2016, she raced in the intermediate eight, intermediate coxed four, and U-19 coxed four at the 2016 USRowing Club National Championships.

Kaytlin Barker, representing Upper Natoma Rowing Club, placed sixth in the youth double in 7:48.264. Barker, who began rowing during her freshman year of high school, has seen continued success with her crew at UNRC. Barker was selected for the 2016 USRowing Junior Women High Performance Team. At the 2016 USRowing Club National Championships, she raced in the intermediate eight, U-19 eight, U-19 coxed four, and U-19 pair, where she won a bronze medal in the U-19 eight and placed fifth in the intermediate eight. Barker rowed in the UNRC’s varsity four at the 2015 USRowing Southwest Youth Championships, where her crew won the event and went on to place second at the 2015 USRowing Youth National Championships. She also raced in the UNRC’s varsity quad and varsity double at the 2016 USRowing Southwest Youth Championships.