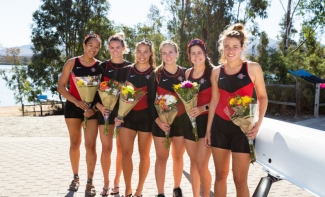 April 20, 2018 (Chula Vista) - The San Diego State rowing team claimed the Patty Wyatt Perpetual Trophy Friday morning for a consecutive season, downing UCSD 13-0 in its races on Otay Reservoir at the Chula Vista Elite Athlete Training Center. The Aztecs secured each of the available points with wins in all four events and honored their senior rowers at the race.

In the V4, SDSU took two more team points with a 7:52.30 finish ahead of UCSD, who came in at 8:04.88. The Aztecs maintained dominance in the final event, the V8, putting up a time of 6:45.80, while the Tritons lagged behind to finish in 6:57.16, allowing SDSU to claim the remaining six points and retain the Patty Wyatt Perpetual Trophy.

“It was a great senior day at Chula Vista,” head coach Bill Zack said. “It was nice to win all four races and retain the Patty Wyatt Perpetual Trophy. We really enjoyed the friendly rivalry with UCSD. Today was great preparation for both teams as we prepare for next weekend’s WIRA championships.”

The Aztecs prepare for the Western Intercollegiate Rowing Association (WIRA) Championships set for April 28-29 on Lake Natoma in Gold River, Calif. Races are scheduled to begin at 8 a.m. each day at the WIRA.