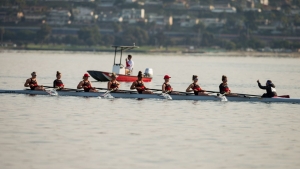 SDSU finishes first in all seven evejnts on Saturday

March 16, 2019 (Gold River, Calif.) - The San Diego State rowing competed in its first day of racing at the Hornet Invitational on Saturday, where the Aztecs swept their opponents in each of the morning and afternoon events.

In the 8:15 a.m. varsity eight race, the Aztecs led Sacramento State by nearly three seconds, finishing in 6:33 while the Hornets clocked in at 6:35.7. In the morning second varsity eight event, SDSU finished with a time of 6:45.5 while Sac State came in at 6:50.0.

“We raced in lane two, with Sac State in lane three, and we gained a significant lead in the first 20 strokes of the race and maintained it throughout the body of the 2k,” sophomore coxswain Hannah Broadland said regarding the morning varsity eight race. “Near the end, Sacramento State gained a couple seats in their sprint but we managed to keep our lead and moved up two seats in the last 10 stroke, finishing with a first place time.”

Sunday’s competition is limited to four total morning events against Kansas State, beginning at 8 a.m. with the V8 race. The two teams will compete in the 2V8 at 8:20 a.m., followed by the 8:40 a.m. V4 race, in which K-State will enter two vessels. The final race of the weekend comes at 9 a.m. when the Aztecs and Wildcats will compete in the 3V8 event.