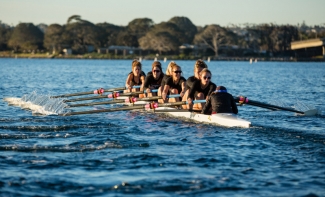 March 19, 2018 (Gold River, Calif.) - The San Diego State rowing team participated in the final day of events at the Hornet Invitational on Sunday, March 18, where it logged two more first place finishes on Lake Natoma to round out the weekend. The Aztecs went head-to-head with the Kansas State Wildcats in each of its races Sunday.

“Today was a pretty good conclusion to a good weekend of racing,” head rowing coach Bill Zack said. “The first eight had their best race. We expected Kansas State to be aggressive off the start and they got a few seats of a lead. Our plan was to stay consistent in the third 500 and that is where we seized control of the race. That result should have SDSU as the number one seed for the Cal Cup next weekend. The second eight and four need to be more aggressive. There are some rowers from the winning third eight that will challenge for seats in the other boats. We head back to San Diego with a lot of wins, tons of good racing experience, and excitement for our hometown regatta.”