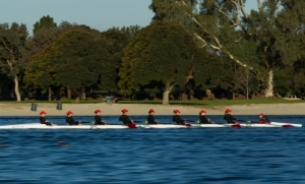 SDSU’s 2V8 won both its races at the WIRA Championships

May 2, 2017 (San Diego) - The San Diego State second varsity eight earned the American Athletic Conference Boat of the Week honor, the conference office announced Tuesday. This is the first weekly award for the 2V8 and just the second conference honor for the SDSU rowing team. The second eight had a stellar weekend in Gold River, Calif., where it won its two races at the Western Intercollegiate Rowing Association Championships on Lake Natoma.

The second varsity eight had a strong performance in its race for lanes on Saturday, where they earned the No. 1 lane for Sunday’s grand final with a 6:45.228 finish. In Sunday’s race, the Aztecs shaved an impressive 11 seconds off their time, finishing in open water in 6:33.831. The SDSU 2V8 led crews from Stanford, Loyola Marymount, Saint Mary’s, Sacramento State and Santa Clara in its two events.

This season, the 2V8 boat has had great success, winning races against Sacramento State, Saint Mary’s, Drexel, LMU and UCSD, in addition to the field at the WIRA Championships.

Up next, the SDSU rowing team travels to Nathan Benderson Park in Sarasota, Fla., for the American Athletic Conference Rowing Championships on Saturday, May 13. The Aztecs will compete against conference opponents Sacramento State, University of Central Florida, University of Connecticut, Southern Methodist, Temple University and the University of Tulsa.