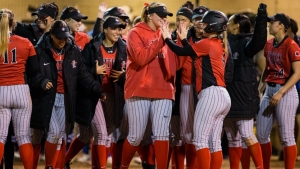 March 9, 2019 (Long Beach) - The San Diego State softball team downed Long Beach State, 4-1, to salvage a Saturday split at the Louisville Slugger Classic in Long Beach.  The win came after the Aztecs (12-12) dropped a 5-1 decision to Ohio earlier in the day.

Down by a 1-0 score, Jessica Cordola ripped a two-run single to left field in the top of the fourth inning to score Taylor Adams and Kayla Sok and put SDSU on top.

In the sixth, Megan Smith scored on a fielding error by 49er (8-12) shortstop Nichole Fry with West Hills alum Katie Byrd at the plate, making it 3-1 San Diego State.

The Aztecs added an insurance run in the seventh as Shelby Thompson scored on a fielder’s choice by Kiera Wright.

SDSU pitcher Alicia Garcia then retired LBSU in order in the seventh to finish with her first complete game at the Division I level. Garcia (4-5) allowed one run on just three hits (all singles) and five walks, while striking out two.

In the opener, the Aztecs were stymied by Bobcat (13-8) pitcher Mackensie Kohl in a 5-1 loss.

Kelsey Munoz provided SDSU a brief spark when she hit a solo home run in the top of the first inning, her third of the season. However, only Molly Sturdivant (single) and Thompson (walk) reached base the rest of the game for San Diego State.

Kohl allowed just the one run on two hits and a walk, while striking out four.

M.J. James took the loss for the Aztecs after allowing five runs on seven hits and six walks over five innings, striking out three. James is now 3-4 on the season. Garcia pitched the sixth inning for SDSU, only yielding one hit.

The Aztecs welcome UC Riverside for a non-conference game on Wednesday at 6 p.m. before starting Mountain West play next weekend at home against New Mexico.