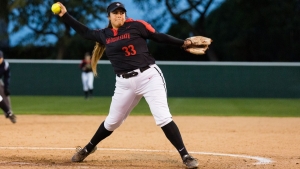 February 22, 2019 (Cathedral City, Calif.) - The San Diego State softball team opened up its play in the Mary Nutter Collegiate Classic with a Friday afternoon split in Cathedral City, Calif. The Aztecs (7-5) shut out Nebraska, 4-0, before falling to No. 16/20 Oklahoma State, 15-5, in five innings.

In the opener, SDSU used the arm of Marissa Moreno and some timely hits to down the Cornhuskers (8-3), 4-0. Nebraska came into the weekend receiving votes in both national polls.

Moreno (4-2) picked up her second straight shutout, holding a Husker team that came into the game with a .314 average and 12 home runs in 10 games to just six hits (five singles) and two walks. The right-hander tied a career high with seven strikeouts. For the game, Moreno stranded eight Nebraska runners, including bases loaded in the third, and two runners each in the second and fourth.

Offensively, San Diego State broke open a scoreless game with three runs in the bottom of the third inning on four hits. Kiera Wright and West Hills alum Katie Byrd led off with back-to-back singles. After Kelsey Munoz grounded into a fielder’s choice which got Wright out at third, Molly Sturdivant ripped a double down the left-field line to score both runners. Speedy Aris Metcalfe replaced Sturdivant and second and promptly scored on single by Shelby Thompson.

The Aztecs tacked on an insurance run in the fifth as Byrd walked, moved to third on a pair of groundouts and scored on a wild pitch.

Byrd and Thompson each singled and walked for SDSU.

In the second game, San Diego State jumped out to a 3-0 lead in the top of the first on two hits and two Cowgirl (10-3) errors, but were unable to stop Madi Sue Montgomery in a 15-5, run-rule loss. Montgomery was 3-for-4 with two home runs, a double and eight RBIs in the OSU win.

In the first, Byrd and Munoz each reached on consecutive one-out singles. Sturdivant then reached on a fielder’s choice as an errant throw to second base allowed Byrd to race home with the first run of the game. After Sturdivant moved to second on a passed ball, Thompson’s double scored both Munoz and Sturdivant. Thompson eventually got to third on a wild pitch, but OSU pitcher Gabby Strang struck out Alizae Umi swinging to get out of the inning with three unearned runs allowed.

Oklahoma State responded in the fifth, scoring five times on two hits and three walks. The two big blows came with two outs, first a two-run triple by Chelsea Alexander and then a bases loaded double by Montgomery.

The Cowgirls added to their lead in the third when Shalee Brantley scored on a double by Raquel Dominguez.

The Aztecs answered in the fourth when they loaded the bases with one out on successive walks by Kristen Parker, Wright and Byrd. With Munoz at the plate, she hit a hard hit ball to the third baseman, who was able to get Parker at the plate. Her throw to first, however, was dropped by the first baseman, which allowed Wright and Byrd to scoot home.

OSU, however, scored six times in the bottom of the fourth, highlighted by two-run homers by Montgomery and Kiley Naomi.

Montgomery completed the run-rule victory in the fifth with a three-run home run.

Moreno took the loss after allowing four runs on one hit and four walks over 1 2/3 innings, while striking out two. Alicia Garcia yielded two runs on three hits and a walk over 2/3 innings of relief with two strikeouts before giving way to MJ James. James scattered nine runs (five earned) on eight hits over 1 2/3 innings, posting one strikeout.

The Aztecs are now 6-1 as the home team this season and 1-4 as the road squad.

In a 4-0 win over Nebraska in the first game today and a 1-0 victory over UC Santa Barbara on Saturday, Marissa Moreno became the first Aztec with back-to-back solo shutouts since Danielle O’Toole shut out Boise State on May 8-9, 2014.

San Diego State continues its play in the Mary Nutter Collegiate Classic with a game against No. 25/23 Texas Tech at 8 p.m. Saturday.