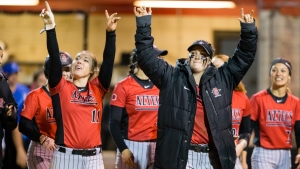 The Aztecs (11-9) used a balanced offensive effort with 14 hits - all singles - to go along with a stellar pitching performance by M.J. James.

Tied at 1-1 after three innings, SDSU scored twice in the top of the fourth inning and three more times in the seventh pick up the victory. San Diego State struck first in the top of the first inning as Kiera Wright led off with a single, stole second base and moved to third on a throwing error by the Colonial (3-12) catcher. Shelby Thompson then followed with a sacrifice fly to center field.

RMU answered in the bottom of the first when a Natalie Higgins single plated Abrielle McCartney.

SDSU threatened in the third on consecutive two-out singles by Thompson and Kelsey Munoz, but Robert Morris pitcher Laura Colter got Maddi Ayers to ground out to third to get out of the inning.

The Aztecs took advantage of their next scoring opportunity in the fourth as Taylor Adams singled, stole second and advanced to third on an infield single by Alizae Umi. Kayla Sok pinch ran for Umi and promptly stole second base. On the play, the Colonial second baseman committed a fielding error, which allowed Adams to trot home for the go-ahead run and Sok to move to third. Aris Metcalfe followed with a groundout to score Sok with the team’s third run of the game.

RMU tried to answer in the bottom of the fourth as it got a pair of runners on base on a single and an intentional walk. With runners on first and third, SDSU’s James (3-2) got out of the inning by getting Brittney Seibert to ground out to Thompson at shortstop.

San Diego State got a pair of runners on base in the fifth on consecutive two-out singles by Munoz and Ayers, but Jessica Cordola grounded out to second base to keep it a 3-1 game.

The Aztecs finally broke the game open in the seventh with three runs on four hits, two stolen bases, a walk and a Robert Morris error. A Thompson single scored Megan Smith with the first run of the inning. Munoz then followed with an infield hit that plated Wright from third and later scored on a sacrifice fly by Adams.

James retired the Colonials in order in the bottom of the seventh to pick up the complete game victory. The right-hander allowed just one run on four hits, two walks and a hit batter, while striking out two.

Adams was a perfect 3-for-3 with an RBI and a run scored to pace the SDSU offense, while Ayers and Munoz each went 3-for-4. Thompson added a pair of hits and two RBIs, and Wright singled, walked and scored twice.

San Diego State improved to 9-2 this season when scoring first and 8-1 when outhitting its opponent.

The Aztecs won their 19th straight game when leading after five innings (8-0 this season).

SDSU started seven underclassmen in the game, including four freshmen. Only one senior started in LF:  Aris Metcalfe.

The Aztecs continue their play in the Louisville Slugger Classic with two games on Friday, first playing Boston University at 9 a.m. and then Liberty at 11:30 a.m.