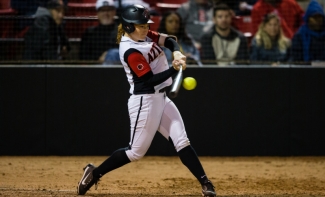 Photo:  Shelby Thompson drove in the winning run and scored the other two in San Diego State's 3-1 win over Boise State.  Courtesy goaztecs.com

March 29, 2018 (San Diego) - Shelby Thompson singled in Janina Jusay (San Diego/Rancho Bernardo HS) to break a 1-1 tie in the bottom of the sixth inning and later scored on a bases loaded walk by Molly Sturdivant to give San Diego State a 3-1 victory over Boise State in the series opener Thursday night at SDSU Softball Stadium. The win snapped a four-game losing streak for the Aztecs (10-21, 1-3 MW).

Thompson also scored in the fourth on a double by Zaria Meshack, one of Meshack’s team-high two hits in the game.