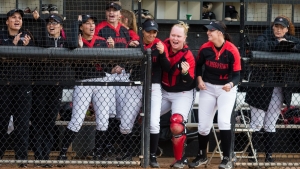 The offense was plenty for Marissa Moreno in the circle. The right-hander tossed a complete game, scattering two runs (one earned) on six hits and no walks over seven innings, while striking out two. Moreno is now 5-3 on the season.

San Diego State jumped out to a 2-0 lead in the top of the first inning when Thompson laced a double to right field to score Wright and Byrd.

The Mustangs (3-9) halved the Aztec lead in the bottom of the first when Noa Yakir reached on an error and later scored on a passed ball.

SDSU made it a 3-1 lead in the second on a single by Munoz that plated Wright.

San Diego State tacked on an insurance run in the fifth as Jessica Cordola had a two-out double and Sturdivant followed with a double to right-center field.

CP put together its best inning in the sixth, where it had three of its six hits in the game. A Maddie Amos single scored Makenna Young to bring Cal Poly to within two runs at 4-2, but Moreno got out of the inning by getting Shelby Jeffries to line out to left field, stranding a pair of runners.

The Aztecs then put the game away with four runs in the seventh, thanks to four hits and an intentional walk. The first run of the inning came when Cordola’s double toward the shortstop scored pinch runner Janina Jusay. Later in the inning with the bases loaded and two outs, Adams took the first pitch she saw into left field for a bases-clearing double and SDSU’s final runs of the game.

The Aztecs had a season-high 15 hits after recording a total of 15 hits in their previous three games at the Mary Nutter Collegiate Classic.

San Diego State travels for a midweek game at Loyola Marymount on Tuesday. First pitch is set for 2 p.m.