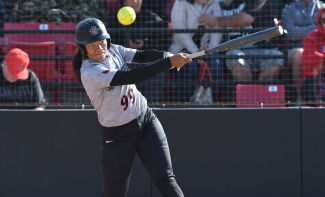 SDSU drops to 0-2 in series with the Spartans

March 17, 2018 (Los Altos, Calif.) - The San Diego State softball team fell to San José State 6-1 Saturday afternoon at Foothills College in Los Altos, Calif. The Aztecs dropped to 9-19 overall and 0-2 in Mountain West play, while the Spartans improved to 18-9 and 2-0.

All seven runs in the game were the result of home runs, including three by SJSU and one by SDSU.

San José State got its runs on a three-run homer by Madison Aurin in the bottom of the second inning, a two-run homer by Jacey Phipps in the fourth and a solo one by Cassidy Clark in the fifth.

San Diego State, meanwhile, got on the scoreboard in the sixth with a solo homer by Taylor Adams, the first of her career.

Molly Sturdivant and Taylor Stewart each added a hit and a walk for the Aztecs, while Shelby Thompson recorded SDSU’s other hit in the game.

Alex Formby took the loss after allowing five runs on five hits, two walks and a hit batter over four innings, while striking out two. Julie McDonald yielded one run on two hits over two innings of relief for San Diego State.

SDSU lost just its second MW series out of its last seven, dating back to last year.

The Aztecs wrap up their nine-game road trip and the weekend series with San José State at noon Sunday. The game is expected to be played at Foothill College in Los Altos, Calif.