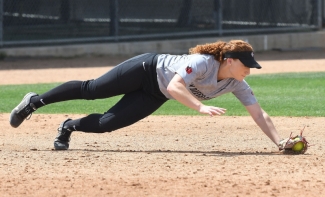 March 31, 2018 (San Diego) - San Diego State quickly fell behind and was unable to rally in an 11-1, five-inning loss to Boise State in the series finale Saturday afternoon at SDSU Softball Stadium. The Aztecs dropped to 10-23 overall and 1-5 in Mountain West play with the series loss, while the Broncos improved to 23-11 and 6-3.

BS, which came into the weekend ranked third in the nation with a .351 average, banged out 14 hits, including three home runs, two doubles and a triple. The offensive output came after the SDSU pitching staff limited Boise State to just 11 hits and a .200 average (11-for-55) over its first two games in the series. The Broncos scored five runs in the top of the first inning, two in the second, one in the third and three in the fourth to complete the run-rule victory.

San Diego State’s lone run came in the bottom of the first inning when it loaded the bases on a single by Kiera Wright, a fielder’s choice by Shelby Thompson and a hit by pitch by Molly Sturdivant. Taylor Adams was then hit by another pitch, allowing Wright to score from third. BS pitcher Kelsey Broadus, however, struck out Alizae Umi swinging to get out of the jam.

Broadus then retired the next 11 batters she faced until the Aztecs threatened in the bottom of the fifth. Wright got things going with a two-out single through the left side and advanced to second on a fielding error. Shelby Thompson followed with an infield single, but Broadus struck out Katie Byrd swinging to end the game.

Marissa Moreno took the loss for San Diego State after allowing five runs on seven hits in 2/3 innings of work. She was replaced by Julie McDonald, who surrendered three runs on five hits and two walks over two innings of relief. Alex Formby came in to pitch the final 2 1/3 innings, giving up three unearned runs on two hits and a walk, striking out one.

The Aztecs have lost their first two series of Mountain West play for just the third time in league history (since 2000). The only other times SDSU lost its first two series in MW play were 2005 and 2017.

SDSU begins a weekend series at UNLV at 6 p.m. Friday.