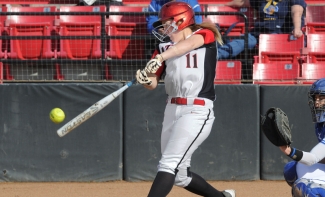 SDSU drops to 1-4 on the season

February 11, 2018 (Tempe) - The San Diego State softball team dropped a 5-3 decision to Nebraska Saturday at the Kajikawa Classic in Tempe, Ariz. The Aztecs fell to 1-4 with the loss, while the Cornhuskers improved to 3-1.

SDSU jumped out to a 2-0 lead in the bottom of the first inning as Kiera Wright (walk) and Katie Byrd (single) each reached base safely and moved into scoring position on a wild pitch. Both runners would score when Molly Sturdivant reached on an NU error. Taylor Adams followed with a single through the right side, but Nebraska starting pitcher Olivia Ferrell got Kelsey Munoz to ground into a double play and then induced a groundout to Shelby Thompson to get out of the inning with just the two runs allowed.

The Cornhuskers tied it in the top of the second, scoring both runs with two outs. Gina Metzler first drove in Alyvia Simmons, who led off the inning with a double, with a single and Taylor Otte later singled in Ferrell, who drew a walk.

Otte put Nebraska up for good in the fourth with a three-run homer.

San Diego State got one back in the bottom of the fourth when Taylor Stewart’s sacrifice fly scored Munoz.

The Aztecs were the only team to get into scoring position the rest of the game when Wright reached on a one-out error in the fifth and advanced to second on Byrd's single. Kaylan Jablonski relieved Ferrell in the circle for the Huskers and got Sturdivant to foul out to right field, which moved Wright and Byrd up a base. Jablonski, however, struck Adams out swinging for the final scoring opportunity of the game.

Byrd had two of SDSU’s five hits in the game to lead the offense.

RHP Alex Formby allowed 11 runs on eight hits and two walks in just 0 2/3 innings in the opener against No. 25/25 Georgia on Thursday night. Since then (three appearances), she hasn’t allowed an earned run on just four hits and one walk in 11 1/3 innings.

SDSU wraps up its play in the Kajikawa Classic in Tempe, Ariz., with a single game against UC Davis at 2 p.m. MT (1 p.m. PT) Sunday.