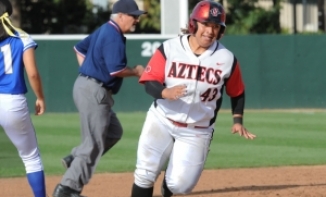 Photo:  Jenavee Peres had three of SDSU's seven hits in a 5-4 loss at Nevada.  Courtesy goaztecs.com

May 12, 2017 (Reno) - The San Diego State softball saw its five-game winning streak snapped in a 5-4, eight-inning loss Friday afternoon at Nevada. The loss dropped the Aztecs to 30-18 overall and 14-9 in Mountain West play.

SDSU can finish second in the MW standings with a win over the Wolf Pack (28-22, 13-10 MW) in the final game of the regular season at noon PT Saturday.

San Diego State led by a 4-2 margin, but three errors in the bottom of the sixth ultimately doomed the Aztecs.

Jenavee Peres (Garden Grove, Calif.) got things going for SDSU when she led off the game with a home run over the centerfield wall. It was her 15th of the season and 33rd of her career. San Diego State loaded the bases with one out on walks drawn by Molly Sturdivant (Santa Ana, Calif.) and Katie Byrd (Santee, Calif./West Hills HS), and a single up the middle by Shelby Thompson (Benicia, Calif.), but Nevada pitcher Kali Sargent struck out Taylor Stewart (Bellflower, Calif.) looking and got Jaylene Ignacio (Oceanside, Calif./El Camino HS) to ground out to her in the circle to end the threat.

The Wolf Pack tied it in the bottom of the first as Aaliyah Gibson led off with a triple and later scored on a fielder’s choice grounder by Kenzi Goins.

After two scoreless innings, the Aztecs went back to work in the fourth when Zaria Meshack (Vallejo, Calif.) and Megan Smith (Valencia, Calif.) each walked and moved up a base on a groundout by Peres. Meshack would score on a sacrifice fly by Sydnee Cable (Huntington Beach, Calif.) before Sturdivant ripped a double past a diving Melissa Arriaga at shortstop to score Smith and put SDSU up by a 3-1 score.

Nevada got one run back in the bottom of the fourth as Alyssa Mendez and Arriaga each singled with two outs, and Hayley Burda singled down the left-field line to score Mendez. San Diego State pitcher Erica Romero (Corona, Calif.) walked Gibson to load the bases, but got Sienna Swain to ground out to Thompson at shortstop to get out of the jam.

The Aztecs scored again in the sixth when Smith reached on an error and later scored on a sacrifice fly by Sturdivant.

The Wolf Pack, however, scored twice in the bottom of the sixth to tie the game up at 4-4, thanks to three SDSU errors in the inning. Both runs were unearned to the San Diego State pitching staff.

The Aztecs got a runner into scoring position in the seventh with one out on a walk to Stewart and sacrifice bunt by Ignacio, but Sargent retired Meshack and pinch-hitter Ashley Ercolano (Poway, Calif./Poway HS), respectively, on a popout and groundout to get out of the jam.

Nevada matched the Aztecs in the bottom of the seventh by leading off with a walk and getting a runner to second on a sac bunt, but SDSU reliever Marissa Moreno (Torrance, Calif.) got Arriaga to line out to Thompson and Burda to ground out to Thompson to force extra innings.

After Sargent retired San Diego State’s 1-2-3 hitters in the top of the seventh, Gibson was hit by a pitch and moved to second on a sacrifice bunt by Swain. After Erika Hansen was intentionally walked, Goins chopped a single into left field to score Gipson to give the Wolf Pack the walk-off victory.

A day after leaving 12 runners on base in an 11-9 win the Aztecs stranded 11 today on seven hits and six walks.

Peres had three of SDSU’s seven hits, while Sturdivant had a double, two RBIs and two walks. Stewart reached twice with a single and a walk, and Smith walked and scored twice.