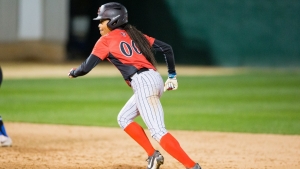 April 5, 2019 (Reno) - The San Diego State softball team lost the opener of its series with Nevada by a 7-2 score Friday afternoon in Reno, Nev.

SDSU jumped out to an early 2-0 lead in the top of the first inning as West Hills alum Katie Byrd hit a one-out double and later scored on a double by Molly Sturdivant. Shelby Thompson, who followed Byrd with a walk, also scored in the inning on a two-out bloop single by Maddi Ayers.

Nevada tied the game up in the bottom of the first, scoring both runs with two outs. The first came on a RBI single by Dallas Millwood that plated Sierra Mello with the second coming when Sadaria McAlister scored on a passed ball.

After leaving two runners on base in the second for the second straight inning, San Diego State loaded the bases in the third on a Sturdivant walk, a Taylor Adams sacrifice bunt and Wolf Pack error, and an Aris Metcalfe single. Kendall Fritz, however, got Nevada out of the inning by getting Kristen Parker to line out to center field.

Nevada took its first lead of the game in the fifth when Kwynn Warner drew a one-out bases loaded walk to score Jessica Sellers. MJ James replaced Marissa Moreno and got a runner out on a fielder’s choice, but McAlister scored on the play to make it 4-2 Wolf Pack. James then got the Aztecs out of the inning by striking out Ashley Salausa swinging.

SDSU’s Kelsey Munoz led off the sixth with a double that just missed being a home run, hitting the yellow line on the top of the fence. Kayla Sok replaced Munoz on the basepaths and moved to second on sacrifice bunt by Metcalfe. Parker then drew a walk to put runners on the corners with one out. Kiera Wright hit the ball hard to Nevada third baseman Alyssa Mendez, but Mendez snagged it and doubled up Parker at first to get Fritz out of the inning.

The Wolf Pack added to its lead in the sixth, scoring three runs on six hits, four hits and a fourth San Diego State error. Mello had two-run triple and Kenzi Goins added a RBI single for the two scoring plays.

Sturdivant had a two-out single in the seventh, but Fritz got Adams to fly out to center field to secure the 7-2 win.

Sturdivant had two hits and a walk to pace the Aztec offense, which tied Nevada with seven hits apiece. Metcalfe was 2-for-2 and Byrd doubled and walked for SDSU.

San Diego State fell to 11-4 when scoring first this season.

The Aztecs dropped to 0-4 in the first game of a MW weekend series this season.

SDSU fell to 14-6 on the season when scoring just two or more runs.

The Aztecs and Wolf Pack play game No. 2 of the series at 1 p.m. on Saturday.