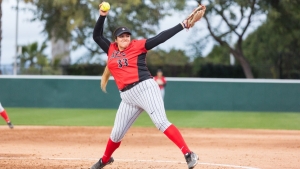 March 15, 2019 (San Diego) - Despite striking out 14 in the game, San Diego State lost to New Mexico, 3-1, in the Mountain West opener for both teams Friday night at SDSU Softball Stadium.

All four runs in the game were scored in the first inning.

The Lobos (8-16, 1-0 MW) quickly loaded the bases on hit by pitch and two walks, and Lauren Wilmert followed with a single up the middle to score a pair of runs. Aztec (12-14, 0-1 MW) pitcher Marissa Moreno struck out Daryn Haslam swinging, but Monica Salas singled down the left-field line to plate Cameryn O’Grady with what would be UNM’s final run of the game.

SDSU answered right back in the bottom of the first when Kiera Wright led off with an infield single and then scored on a New Mexico error on a sacrifice bunt by Katie Byrd. Byrd later got to third on a groundout and a single by Taylor Adams, but Kennedy Ferguson got out of the jam by getting Shelby Thompson to line out to center field.

The Lobos once again loaded the bases with no outs in the second on two singles and a walk, but Moreno struck out Andrea Howard and O’Grady swinging, and got Wilmert to fly out to deep center field to end the threat.

In the fourth, Molly Sturdivant led off with a single and was replaced by Aris Metcalfe. Metcalfe moved to third on back-to-back groundouts, but Kelsey Munoz flied out to right field to keep the score at 3-1.

After Alicia Garcia replaced Moreno (5-4) in the circle in the sixth, UNM had consecutive one-out singles to get into scoring position. Garcia got out of the inning by getting Sydney Townes to ground back to her for a fielder’s choice at third and then struck out D’Andra DeFlora swinging.

Down to its last out in the seventh, Kylie Fraser came through with a pinch-hit double. Wright, however, grounded out to shortstop to end the game.

Moreno took the loss, despite striking out a career-high 11 batters (her previous best was seven). Moreno allowed three runs on four hits, four walks and a hit batter.

RHP Marissa Moreno struck out 11 batters, the most by an Aztec pitcher since Rebecca Arbino had 11 against UNLV on May 9, 2013.

The Aztecs will look to even the series with New Mexico at 6 p.m. Saturday.