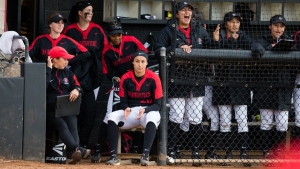 SDSU run-ruled in five innings in rubber game of series

March 23, 2019 (Boise) - The San Diego State softball team was unable to overcome a difficult first inning in a 16-1, five-inning loss in the series finale at Boise State on Saturday afternoon.

BS added five insurance runs in the second for its final runs of the game.

SDSU broke through with a run in the top of the third as Kristen Parker walked, moved to second on a wild pitch and scored on a Katie Byrd single.

San Diego State threatened again in the fourth when Molly Sturdivant and Kelsey Munoz singled. With two outs, Parker singled to center field, but Alizae Umi, who replaced Sturdivant on the basepaths, was thrown out at the plate.

The Aztecs tried again in the fifth as Byrd and Taylor Adams each reached on back-to-back two-out singles, but Umi struck out swinging to end the game.

Adams and Byrd had two hits apiece for SDSU, while Parker (1-for-1, R, BB) and Munoz (1-for-1, HBP) each reached base safely twice in the game.

San Diego State fell to 6-9 single-day games this season (the Aztecs are 9-7 in days with multiple games).

SDSU dropped to 3-12 on the season when being outhit (San Diego State is 11-3 when outhitting its opponent).

The Aztecs return home for a weekend series with UNLV beginning at 6 p.m. Friday.