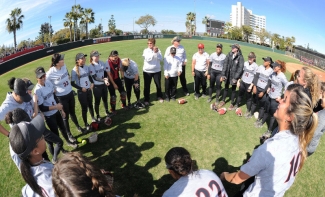 SDSU is swept in its opening Mountain West series

SDSU got on the scoreboard first in the top of the first inning when Taylor Adams scored on an error after a Taylor Stewart single. The Spartans (19-9, 3-0 MW), however, scored the final nine runs of the game to complete the run-rule victory.

SJSU scored two runs in the bottom of the first on a single and an error, three in the third on a three-run homer by Madison Aurin, and four in the fourth on a solo home run by Emma Entzminger and another three-run homer by Aurin. For the day, Aurin was 2-for-3 with two home runs and six RBIs at the plate, and got the win in the circle after allowing one unearned run on two hits and a walk over five innings, striking out two.

Adams and Stewart each singled for San Diego State, while Iesha Hill drew a walk.

SDSU was swept in a Mountain West series for the first time since April 1-3, 2016 against Fresno State.

The Aztecs finally return to SDSU Softball Stadium on Tuesday, March 27 for a non-conference game at 6 p.m. against San Diego before hosting Boise State for a three-game series from March 29-31.