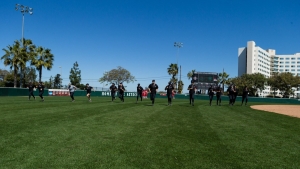 SDSU loses series with the Rebels

UNLV scored the first six runs of the game, starting with a triple by Kiley Harrison in the top of the second inning that scored Mia Trejo.

The Rebels used a pair of home runs to add four runs in the third, including a solo homer by Reina Bondi and a three-run home run by Trejo.

A Harrison single in the fourth plated Justine Federe with UNLV’s sixth run of the game.

The Aztecs (15-18, 3-5 MW) finally got on the scoreboard in the bottom of the fifth when they loaded the bases with two outs on a Kelsey Munoz walk, Kristen Parker single and Aris Metcalfe single. Shelby Thompson then reached on an error by Federe at second base, which allowed Munoz and Parker to trot home with SDSU’s two runs in the game.

The Rebels scored their final run in the sixth when Federe’s sacrifice fly scored Bondi.

Taylor Adams, Metcalfe, Parker and Kiera Wright each singled for San Diego State, which was outhit by UNLV 11-4. Munoz also reached base safely with the aforementioned walk.

Marissa Moreno took the loss for the Aztecs after allowing five runs on eight hits and a walk over 2 1/3 innings, while striking out two. She is now 7-6 on the season.

Patrick Henry grad M.J. James pitched the final 4 2/3 innings of the game, surrendering two runs (one earned) on three hits, a walk and a hit batter.

SDSU had won five straight games in the middle game of a Mountain West series prior to tonight.

San Diego State dropped to 14-4 on the season when scoring just two or more runs.

The Aztecs and Rebels finish their weekend series at noon on Sunday.