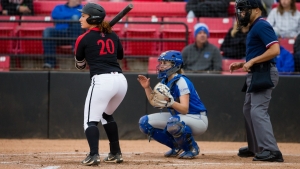 March 3, 2019 (San Diego) - San Diego State ended its play in the San Diego Classic on a sour note in a 6-4 loss to Weber State Sunday afternoon at SDSU Softball Stadium.

The Wildcats (4-9) got on the scoreboard with a pair of runs in the top of the third inning on a two-run double by Courtney Pestka.

San Diego State responded with four runs in the bottom of the third on two hits, three WSU errors and a walk. The lone RBI in the inning was a single by Maddi Ayers that scored Shelby Thompson. Kiera Wright, Kelsey Munoz and Ayers also scored on Weber State miscues.

The Wildcats took back the lead with three runs in the fourth, thanks to some defensive mistakes by the Aztecs. WSU loaded the bases on consecutive singles and walk. After a foul out, Brooke Moeai grounded to Thompson at shortstop, but Thompson’s throw home to get the lead runner sailed left, allowing Sydney White and Takesha Saltern to score. Ashlyn Visser then hit another ball to Thompson, who was unable to get a throw off as Landi Hawker scored from third base. Alicia Garcia finally got out of the inning that started with M.J. James in the circle by getting Katelyn Whitting out at the plate on a fielder’s choice and later struck out Courtney Pestka looking.

After SDSU left the bases loaded in the sixth for a second time in the game (also in the first inning), Weber State tacked on a run in the top of the seventh as White scored on a fielding error by San Diego State.

The Aztecs had one more chance in the seventh when Kelsey Munoz reached on a one-out single and was replaced by the speedy Aris Metcalfe. Metcalfe got to second when the Wildcat shortstop’s throw to second was late on a batted ball by Kylee Fraser. Megan Smith promptly replaced Fraser at first, but WSU pitcher Tatiana Su’esu’e got Kristen Parker to line out to right field and Paige Barth to ground out to first to end the game.

Thompson led the SDSU offense by going 2-for-2 with two walks and a run. Ayers and Munoz each added a single and a walk, while Barth doubled for her first career hit.

Garcia (3-4) was the tough luck loser, allowing three unearned runs on two hits, two walks and a hit batter, while striking out two. James pitched the first three innings, scattering three runs (two earned) on seven hits, a walk and a hit batter. She struck out one.

San Diego State dropped to 7-2 on the season when scoring at least four runs.

The Aztecs are now 2-7 on the year when being out hit (7-1 when outhitting their opponent and 1-0 when hits are tied).