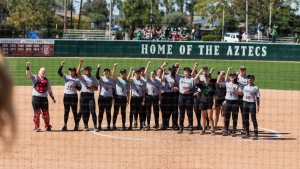 Leading 4-1 heading into the seventh inning, Aztec (14-14, 2-1 MW) pitcher Marissa Moreno allowed a two-run home run by Lauren Wilmert off the glove of right fielder Janina Jusay to bring the Lobos (8-18, 1-2 MW) to within a run. With no outs, Moreno retired the next three batters in order with a lineout and two groundouts to secure the win for SDSU.

San Diego State jumped out to a 3-0 lead in the bottom of the third on a Taylor Adams single that scored Megan Smith, and a two-run single by Kristen Parker that plated Shelby Thompson and Kelsey Munoz.

UNM, which left the bases loaded in the first and two runners on in the third, finally got on the scoreboard in the top of the fifth as Andrew Howard led off with a triple and, two batters later, scored on a triple by Bailey Klitzke. With two outs and Klitzke on third, Aztec pitcher Alicia Garcia got Daryn Haslam to ground out to Adams at first base and keep a 3-1 lead.

SDSU added an important run in the bottom of the fifth as Adams doubled, moved to third on a wild pitch and scored on a two-out single by Kylie Fraser.

Moreno replaced Garcia in the sixth, and worked around a hit and a walk to get out of the sixth, before New Mexico got to her with the two-run homer in the seventh. She then sealed the game with the aforementioned lineout and consecutive groundouts.

Adams wrapped up a solid weekend by going 2-for-2 with a RBI, run, double and a walk to pace the San Diego State offense. Fo the weekend, Adams was 5-for-9 (.556) with a home run, double, walk, four RBIs and two runs scored.

Maddi Ayers singled and walked, while Munoz scored a run and drew two walks for the Aztecs.

Garcia (5-5) picked up the win after allowing one run on three hits over 2 1/3 innings, while striking out one. Moreno pitched the final two innings, giving up two runs on two hits and two walks, striking out two for her second save of the season. M.J. James started the game and tossed 2 2/3 scoreless innings, yielding three hits and a walk.

San Diego State improved to 7-1 on the season in one-run games.

The Aztecs hit the road for the first time in Mountain West play in a weekend series at Boise State beginning 4 p.m. MT (3 p.m. PT) Friday.