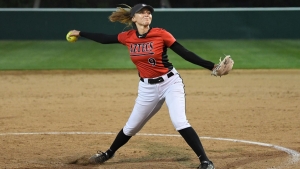 SDSU hands Rams just their eighth loss of the season

April 27, 2019 (Fort Collins, Colo.) - The San Diego State softball team knocked off No. 25 Colorado State 5-4 to even its weekend series Saturday afternoon at Ram Field in Fort Collins, Colo. The Aztecs improved to 21-23 with the win and 8-9 in Mountain West play, while the league-leading Rams dropped to 35-8 and 16-4.

San Diego State threatened first in the game in the top of the second inning when Molly Sturdivant and Taylor Adams reached on consecutive no-out singles. Kelsey Munoz followed with a double down the left-field line to plate Sturdivant with the first run of the game. Garcia then chopped a grounder to CSU pitcher Jessica Jarecki, which scored Adams to make it a 2-0 game. SDSU couldn’t get Munoz home, though, stranding her at third.

Colorado State got on the scoreboard in the bottom of the third when Amber Nelson’s two-out single scored Danni Klein. With a pair of runners in scoring position, Aztec starting pitcher Garcia got Ram cleanup hitter Tara Shadowen to pop up weakly to Adams at first base to keep the damage to a minimum.

SDSU looked to add to its lead in the fourth as Adams (single) and Munoz (error) each reached base, and Garcia moved them up a base on a groundout. Jarecki, however, got Parker to line out to first base and pinch-hitter Kylie Fraser to check-swing a dribbler to her in the circle for the unassisted putout, keeping the score 2-1.

CSU took advantage of three San Diego State errors in the bottom of the fourth to score one run when Brooke Polenz stole second and scored on a pair of throwing miscues.

The Aztecs responded in the fifth on a well-executed hit-and-run play as Shelby Thompson laced a double down the left-field line to score Kiera Wright all the way from first base. SDSU tacked on two more runs as an Adams single plated Thompson from second base and a single by Garcia off the glove of Colorado State first baseman Ruiz, giving San Diego State a 5-2 lead.

The Rams got one back in the sixth when Kaitlyn Cook’s two-out double plated Brenna Scudellari from first base.

CSU put together one last rally in the seventh when Ashley Michelena singled with one out and Haley Donaldson followed with a walk. After a ball to Colorado State’s best hitter Amber Nelson, Marissa Moreno replaced Garcia in the circle. A wild pitch moved the runners up a base and Nelson drove a ball to foul territory to Aztec left fielder Kristen Parker, who caught it, which allowed Michelena to score on the sacrifice fly. Moreno, however, struck out Ram cleanup hitter Shadowen to end the game.

Garcia (9-6) picked up the win after allowing four runs (three earned) on six hits and four walks over 6 1/3 innings, while striking out one. Moreno earned her third save of the season with a strikeout, retiring the final two batters of the game.

Adams was 3-for-3 with a RBI, run and walk to pace the SDSU offense. West Hills alum Katie Byrd and Munoz added two hits apiece, while Molly Sturdivant singled and drew a walk.

The Aztecs improved to 11-4 on the season in one-run games.

SDSU improved to 1-3 on the season against nationally ranked schools, snapping a five-game losing streak.

SDSU and CSU play the rubber game of the series at noon MT/11 a.m. PT Sunday.