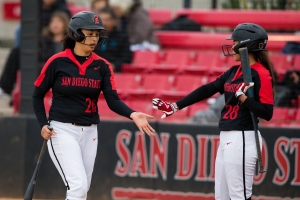 Moreno (3-1) allowed just four hits and two walks, while striking out six, to pick up her first shutout of the season.

SDSU’s lone run came in the bottom of the fourth when Aris Metcalfe scored on grounder by Kristen Parker (Mira Mesa HS).

In the nightcap, San Diego State got behind early and ended up leaving eight on base, while committing three errors in an 8-0 loss to Grand Canyon. It was the first loss of the tournament for the Aztecs, who were looking to capture their fourth Campbell/Cartier Classic title. SDSU will now need Northern Illinois to lose to UC Santa Barbara 9 a.m. Sunday to finish with the championship.

Kiera Wright had two of San Diego State’s four hits in the loss.

The Aztecs play at Cal State Fullerton on Wednesday night at 6 p.m.

Noriega and Thies; Moreno and Sturdivant