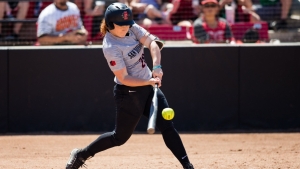 San Diego State picked up where it left off yesterday, scoring three times in the bottom of the first inning with two outs. Taylor Adams first singled in West Hills grad Katie Byrd, and Kelsey Munoz later scored Molly Sturdivant and Adams with another single. The Aztecs had the bases loaded, but Nevada pitcher Kendall Fritz struck out Kristen Parker swinging to get out of the inning.

SDSU had another chance to score in the second, but left runners on second and third with one out after Sturdivant popped up to shortstop and Adams lined out to second base.

The Wolf Pack got two runs back in the bottom of the second inning on RBI singles by Haley Burda and Sierra Mello.

San Diego State threatened again in the fifth after a Munoz double had runners on second and third with one out. Fritz, however, got Aris Metcalfe to pop out to third base and pinch hitter Kylie Fraser to ground out to second to get out of the inning.

In the seventh, Adams got things going with a leadoff double. She then moved to third on a groundout by Maddi Ayers. After Munoz fouled out, pinch hitter Jessica Cordola hit a hard ball toward the right side of the field, but Nevada second baseman Sierra Mello made a diving stop and got the out at first base.

Alicia Garcia retired the Wolf Pack in order in the seventh to secure the win for the Aztecs.

Adams, Byrd and Thompson each had three hits apiece to pace SDSU, while Munoz had two hits and two RBIs. Metcalfe also reached twice with a single and a walk.

Garcia (7-6) picked up her second win of the series, tossing five scoreless innings of relief, allowing just two hits and two walks. For the weekend, Garcia was 2-0 with a 0.78 ERA in nine innings of relief.

Patrick Henry alum M.J. James started the game and surrendered two runs on four hits, a walk and a hit batter over two innings, striking out one.

The Aztecs improved to 8-3 on the season in one-run games.

SDSU has at least 10 hits in back-to-back games for the first time this season and first time since doing it three straight games from April 29-May 5, 2018.