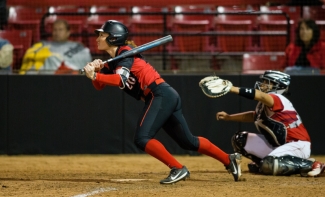 May 11, 2018 (San Diego) - Shelby Thompson homered and drove in three runs, and Julie McDonald pitched a four-hit complete game in a 6-1 San Diego State victory over Utah State Friday night at SDSU Softball Stadium. The Aztecs (19-31, 10-13 MW) clinched the series with the win.

SDSU jumped out to a 4-0 lead in the bottom of the second, all with two outs, on four hits and two Aggie (18-33, 7-16 MW) errors. Thompson and Taylor Stewart came up with RBI singles for San Diego State, while Thompson and Kelsey Munoz scored on throwing errors after Aztec singles.

Thompson made it 6-0 SDSU in the fourth when she drilled a two-run home run over the left-field fence. It was her team-leading sixth homer of the season and fifth in MW play.

After holding USU scoreless over the first 12 2/3 innings of the series, San Diego State gave up its first run with two outs in the top of the sixth when Brina Buttacavoli homered just inside the left foul pole.

The offense was plenty for McDonald (4-3). The right-hander allowed one run on four hits, three walks and a hit batter, striking out two. It was her second straight complete game victory (also last Saturday (May 5) at New Mexico).

The Aztecs outhit their opponents for the fifth straight game and have outhit or matched their opponent in seven consecutive games.

SDSU won its 10th straight game when leading after five innings (12-1 this season).

San Diego State has only one error over its last five games for a .993 fielding percentage over that span.

The Aztecs look for their first series sweep of the season when they meet the Aggies at 11 a.m. Saturday. Following the game will be a special ceremony honoring SDSU’s five seniors - Alex Formby, Iesha Hill, Zaria Meshack, Jenavee Peres and Taylor Stewart.

White and Buttacavoli; McDonald and Sturdivant