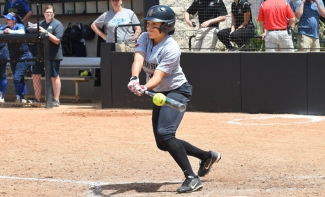 Photo: Kiera Wright had three hits to lead the Aztecs in a 5-1 loss at Fresno State.  Courtesy goaztecs.com

SDSU got down early as FS scored three runs in the first, and one each in the second and third innings, but was held hitless the rest of the way.

The Aztecs got a pair of runners on base in the top of the first inning on a Kiera Wright single and Shelby Thompson hit by pitch. After a lineout by Katie Byrd, Wright was caught stealing at third and Kelsey Munoz popped to second base to keep San Diego State off the scoreboard.

FS responded in the bottom of the first, loading the bases with one out on back-to-back walks and a single. Rachel Minogue then cleared the bases with a double off the left-center field wall. Aztec starting pitcher Julie McDonald settled down and got Vanessa Hernandez to fly out to left fielder Zaria Meshack and Schuylar Broussard to ground out to Thompson at shortstop to end the inning.

Fresno State added to its lead in the second when Kaitlyn Jennings walked, stole second and scored on a double by Katie Castellon.

The Bulldogs chased McDonald (2-3) from the game in the third after a walk and another double by Minogue scored Brooke Coates from first base. Alex Formby replaced McDonald in the circle and retired the three batters she faced in order to get out of the inning.

SDSU finally got on the scoreboard in the top of the sixth inning when Wright led off with a single and scored on a double down the left-field line by Thompson. One batter later, Thompson moved to third on a passed ball, but stayed there after FS pitcher Samantha Mejia struck out Kelsey Munoz looking and, after a walk to Taylor Stewart, got Taylor Adams to pop up to shortstop.

San Diego State threatened again in the seventh with two outs on consecutive singles by Zaria Meshack and Wright, but Thompson’s fly to left field ended the game in favor of FS.

The Aztecs outhit Fresno State 7-4 in the game, but left seven on base, going 2-for-13 (.154) with runners on base and 0-for-8 with runners in scoring position.

Wright had three hits to pace the SDSU offense, while Meshack added a pair of singles.

McDonald took the loss after allowing five runs on four hits and four walks over two innings, striking out one. Formby faced the minimum, tossing four hitless innings with just one walk allowed, while striking out two. The one batter she walked was replaced by a pinch runner, who was called for leaving early at first base.

San Diego State dropped to 10-6 on the season when outhitting its opponent.

The final game of the series between San Diego State and Fresno State is at noon on Sunday.