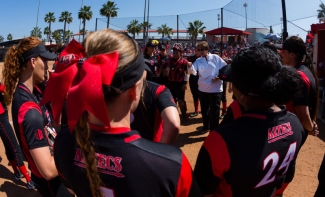 February 14, 2018 (Riverside) - The San Diego State softball team was unable to get things going offensively in a 4-1 loss at UC Riverside Wednesday afternoon in Riverside, Calif. The Aztecs dropped to 1-6 with the loss, while the Highlanders evened their record to 3-3.

SDSU was outhit 10-5 by UCR in its fourth straight loss.

UC Riverside got on the scoreboard with a pair of runs in the bottom of the first inning when Sarah Parten’s two-run, two-out single through the right side scored Jenna Curtan and Brittney Garcia.

After UCR pitcher Tayler Misfeldt struck out SDSU in order in the top of the second, the Highlanders added to their lead in the bottom half of the inning as Danielle Ortega led off with an infield single and moved all the way to third on a sacrifice bunt by Seanna Garewal. Curtan followed with a single to left-center field and later scored on a sacrifice fly by Garcia to give UCR a 4-0 lead after two innings.

San Diego State finally scored in the fifth when Taylor Stewart singled and was pinch ran for by Aris Metcalfe. Iesha Hill then ripped a double over the centerfielder’s head to score Metcalfe. Kayla Sok, who replaced Hill at second, moved to third on a sacrifice bunt by Zaria Meshack, but was held there after Misfeldt got Janina Jusay to strike out swinging and Katie Byrd to fly out to right field.

The Aztecs threatened again in the sixth when Jordyn Fick replaced Molly Sturdivant after a single and moved to second on a walk to Taylor Adams. Shelby Thompson, however, lined to shortstop Hanna Rodriguez, who was able to flick the ball to Garcia at second for the inning-ending double play.

SDSU went in order in the seventh for its fourth straight loss.

SDSU has its first four-game losing streak since losing four (three against nationally ranked teams) at the Mary Nutter Collegiate Classic from Feb. 19-21, 2015.