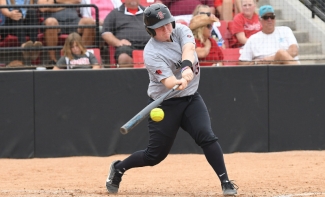 SDSU leaves nine on base in 3-0 setback

Photo:  Molly Sturdivant had two of SDSU's five hits in a 3-0 loss to Colorado State on Friday night.  Courtesy goaztecs.com

April 28, 2018 (San Diego) - San Diego State was unable to come up with the key hits in a 3-0 loss to Colorado State in the series opener Friday night at SDSU Softball Stadium.

In the decisive top of the first inning, CSU used back-to-back leadoff singles by Sarah Muzik and Lauren Buchanan, followed by a double by Haley Donaldson to get its first run of the game. After a groundout that held both runners in scoring position, Amber Nelson tripled down the right-field line to score both runners. Moreno (4-15) then retired Danni Klein and Isabella Navarro on groundouts to get out of the inning.

The back-to-back outs started an impressive streak for Moreno. Following the two-run triple by Nelson, Moreno retired the next 13 batters she faced until a two-out single by Muzik in the fifth inning. Moreno then got the next five Colorado State players out before Navarro reached on a one-out single in the seventh, moving to second on a SDSU throwing error. Madison Kilcrease replaced Navarro at second and moved to third on a wild pitch. Moreno, however, got pinch-hitter Nicole Valdez to pop up to shortstop Shelby Thompson and Ashley Michelena to strike out looking to get out of the jam.

For the game, Moreno allowed three runs on six hits over seven innings, striking out two.

San Diego State had plenty of chances to score, but was unable to come up with the clutch hit.

The Aztecs loaded the bases in the bottom of the second with one out on a single by Taylor Stewart, a hit by pitch by Taylor Adams and a single by Molly Sturdivant, but Ram pitcher Bridgette Hutton struck out Janina Jusay looking and got Zaria Meshack out when she made contact with the ball while her foot was outside the batter’s box.

Thompson doubled for SDSU in the third inning with one out and moved to third on a Katie Byrd groundout, but Katie Munoz’ deep flyout was caught at the warning track by Michelena in center field.

In the sixth, Stewart reached on a two-out walk and advanced to second on walk by Adams before Hutton struck out Sturdivant to get out of another jam.

Sturdivant had two of SDSU’s five hits, while Stewart singled and walked. Adams also reached twice with a walk and a hit by pitch.

Out of the Aztecs’ 29 losses this season, 20 have been by three or less runs.

SDSU RHP Marissa Moreno recorded her fourth complete game of the season and seventh of her career.

The Aztecs continue their series with Colorado State at 6 p.m. Saturday.

Hutton and Nelson; Moreno and Sturdivant