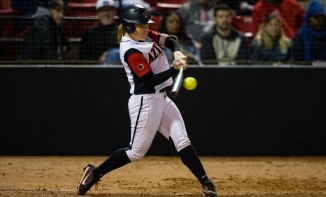 February 25, 2018 (Cathedral City, Calif.) - The San Diego State softball team was held to just one hit in a 2-0 loss to UC Davis in the final game of the Mary Nutter Collegiate Classic Sunday afternoon in Cathedral City, Calif. The Aztecs dropped to 6-10 with the loss, while the Aggies improved to 10-6.

UCD scored its runs in the top of the third inning when Alex Sotomayor had a one-out single and scored on a deep double to left-center field by Alyse Rojas. Rojas then moved to third on a sacrifice bunt and scored on a SDSU throwing error with Isabella Leon at the plate.

San Diego State broke up Katie Kibby’s perfect game in the bottom of the fifth with a one-out double to left field by Shelby Thompson. Thompson, however, was left stranded in scoring position after a popout and a groundout.

The Aztecs didn’t get another baserunner until the bottom of the seventh when Molly Sturdivant reached on a one-out error and was replaced by Janina Jusay. But Kibby struck out Taylor Stewart swinging and got Thompson to ground into a fielder’s  choice at shortstop to end the game.

Kibby allowed just the one hit over the complete game shutout, while striking out six.

Marissa Moreno was the tough luck loser for SDSU, yielding two runs (one earned) on three hits over three innings. Alex Formby relieved Moreno in the fourth and gave up two hits and a walk over the final four innings of the game, striking out two.

San Diego State lost to UC Davis for the second time of the season (also 3-2 in nine innings on Feb. 11). The Aztecs are now 0-4 against repeat opponents with three of those setbacks coming in extra innings (also vs. Northwestern (7-6 in eight innings) on Feb. 9 and 3-0 on Feb. 23 in eight innings)).

The Aztecs co-host the San Diego Classic I at SDSU Softball Stadium, beginning with UCF a 6 p.m. Thursday.