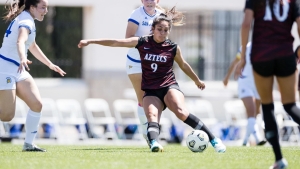 March 28, 2021 (San Diego) - San Diego State attempted 19 shots with three finding the back of the net and the Aztecs cruised to a 3-0 win over the San Jose State Spartans on Sunday afternoon on the Sports Deck.

The victory moves the Aztecs to 6-1-0 on the season and maintains the team’s position at the top of the West Division table.

Anna Toohey led the Aztecs attack with four shots, all on goal, and had the first goal of the game at the 16:04 mark. Claire Watkins played the ball from midfield to Laura Fuentes at the top of the box. Fuentes laid the ball off to Toohey on her left, who then fired the ball back across the goal. SJSU keeper Zoe Aguirre got a hand on the shot, but it was too hard for her. It was Toohey’s third goal in as many games and would end up being her second game winner of the weekend.

Emma Gaines-Ramos fed Fuentes at the top of the 18. Fuentes took one touch and fired a shot low to the left side of the goal and past a diving Aguirre to make it 2-0 Aztecs. It was Fuentes’ second goal of the year and Gaines-Ramos’ team-leading third assist.

The Aztecs put the finishing touch on the Spartans (0-6-1) at the 50:59 mark with a Kiera Utush strike off a free kick outside the box on the left side.  Utush pounded the ball inside the far post to make it 3-0.

Keeper Alexa Madueno recorded her second career shutout and second in the last three games. She had three saves against the Spartans and ran her record to 6-1-0.

San Diego State has put together its second three-game winning streak of the season.

Anna Toohey put all four shots she took in the game on frame and for the weekend, all seven shots she attempted were on goal.

Laura Fuentes led the team with a goal and an assist.