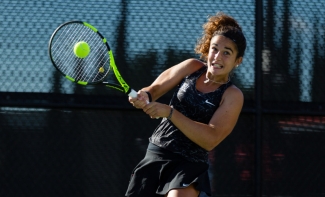 SDSU drops first loss of the season to a ranked opponent

February 1, 2018 (Berkeley) -  The San Diego State women’s tennis team put up a tough fight against No. 14 California but ultimately fell short in its first road match of the season, 5-2. The Aztecs were edged out of the doubles point and could not put together enough singles victories to overcome the ranked Golden Bears.

In doubles action, sophomore Mia Smith and junior Jenny Moinard took on Anna Bright and Julia Rosenqvist in the No. 1 seed but could not keep the match close, dropping a 6-1 decision. Cal’s Vivian Glozman and Maria Smith were also dominant in doubles, taking down seniors Jana Buth and Paola Diaz 6-2.

Though the Bears claimed the doubles points with wins on courts one and two, freshman Nnena Nadozie and junior Magda Aubets battled on court three to overcome Jasie Dunk and Alexis Nelson, 7-6 (2).

The Aztecs got off to a slow start in the top two singles matches, where Aubets was challenged by Rosenqvist and dropped the second seed match, 6-0, 6-2, while Buth struggled against the 27th-ranked Anna Bright, falling 6-1, 6-1. With the Bears nearing a decision in the dual, freshman Abbie Mulbarger stopped Audrey Mayer in her tracks, logging an impressive 6-3, 6-0 finish on court six to give the Aztecs their first match point of the afternoon. Nadozie held on in the fifth seed going to a third set against Jasie Dunk, but eventually dropped the decision, 3-6, 6-2, 6-0, and Dunk clinched the dual decision for Cal.

The Bears and Aztecs played out the remaining two matches where Moinard maintained her lead over Nelson to add to the SDSU point total with a 6-4, 6-3 win in the No. 4 seed. Cal’s Smith and SDSU’s Diaz played out a couple long sets to take the match into a 10-point tiebreak, but Smith topped Diaz 6-2, 6-7(6), 10-4 to bring the final score to 5-2.

Up next, the 3-1 Aztecs return to the Aztec Tennis Center Saturday, Feb. 3, where they are set to host UC Davis in a noon matchup. Results will be available following the conclusion of the match at www.GoAztecs.com.