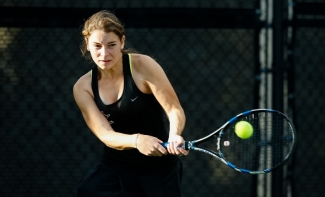 SDSU participates in final round of play Sunday

October 1, 2017 (San Diego) - The Aztec women’s tennis team finished off its three-day SDSU Fall Classic I, closing out play with four wins on Sunday. The ended its tournament with two wins in doubles play and two singles victories at the Aztec Tennis Center.

In the doubles red draw, senior Paola Diaz and freshman Abbie Mulbarger had a tough go against LMU’s Yesica De Lucas and Camila Tumosa, falling 6-2, while junior Jenny Moinard and sophomore Berta Acero put together a 6-3 win over Kiryang Kim and Monika Van de Vondel of CSUN in the gold doubles draw.

The Aztecs dominated in the round robin bracket as the duo of junior Magda Aubets and freshman Nnena Nadozie claimed a 6-0 victory over SJSU’s Laura Malsert and Tamara Culibrk.

Though SDSU was less successful in the singles brackets, Nadozie took opponent Tumosa (LMU) to three sets for a 6-3, 2-6, 6-2 win in the red championship draw. Aubets was not as fortunate in the bracket’s consolation final, falling to SJSU’s Culibrk, 7-5, 6-1.

The second win for Aztec singles play came from Mulbarger’s victory over Anna Romeka (LMU), 7-6(2), 6-3, in the black consolation draw. In the championship round, Moinard was unable to get past SJSU’s Miyo Kobayashi, 6-4, 6-3.

In the white bracket, Acero took opponent Julie Vereecke (SJSU) to three sets with no avail, ultimately falling 6-3, 3-6, 6-2. Diaz was also unsuccessful in her matchup in the blue draw, falling 6-1, 6-2 to USD’s Daniela Morales.

The Aztecs will take a short break before participating in the ITA Regionals at the Barnes Tennis Center in San Diego the week of October 18.