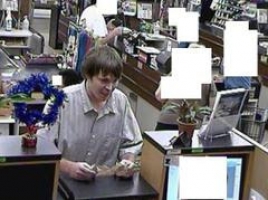 August 7, 2014 (Spring Valley)--The Sheriff's Department wants your help in identifying and locating a man who robbed a bank in Spring Valley.

It happened just before 7:00 p.m. on Wednesday, July 30th, at the U.S. Bank located inside Albertsons in the 9800 block of Campo Road.

Investigators say the suspect walked up to a bank teller and demanded money. He started using expletives and threatened to shoot the teller in the head.

The suspect then placed a plastic shopping bag on the counter, which appeared to contain an unknown solid object. He was given an undisclosed amount of money and left the store.

Take a good look at the surveillance photos from the bank robbery contained in this bulletin. Pay attention to what the suspect is wearing and how he looks like.

Anonymous email and text messages can be via www.sdcrimestoppers.org.