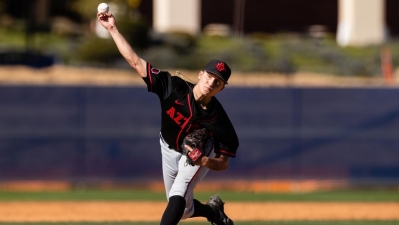 March 14, 2021 (San Diego) - San Diego State scored six runs in the bottom of the seventh inning on Sunday to overcome a 5-2 deficit and defeat UNLV 8-6 in the rubber game of a weekend set at Tony Gwynn Stadium.

With the victory, the Aztecs capture their fourth straight series to open the season, improving to 9-4 overall and 4-2 in the Mountain West. Despite maintaining a 13-10 advantage in hits, the Rebels slip to 6-3 on the year, all against conference opponents, after stranding 13 baserunners.

SDSU sent 10 batters to the plate in the pivotal seventh, scoring five of its six markers with two outs, capped by Jacob Cruce’s clutch two-run single to left.

With the Aztecs trailing 5-2, three-time reigning Mountain West Player of the Week Jaden Fein led off the inning with a single and later scored from third after Ryan Orr reached on a fielder’s choice. Orr was soon erased at second on Cole Carrigg’s grounder to short, but the SDSU freshman beat the relay to first, keeping the Scarlet and Black’s comeback hopes alive.

The Aztecs kept pecking away, as Caden Miller, Mike Jarvis and Matt Rudick roped base hits, chasing UNLV reliever Jimmy Gamboa, who entered at the beginning of the frame. Jarvis’ single plated Carrigg, while Miller raced home on Rudick’s hit, tying the score at 5-5.

Troy Balko took the mound for the Rebels but quickly yielded a stolen base to Rudick before plunking Wyatt Hendrie with a pitch. With the bases loaded, Balko promptly uncorked a wild pitch, as Jarvis slid safely into home, putting SDSU in front for the first time in the game. Moments later, Cruce stepped up and drove home Rudick and Hendrie, giving the Aztecs an 8-5 advantage.

UNLV got a run back in the eighth when Jack-Thomas Wold’s single plated James Gamble, who led off with a double and advanced to third on a deep flyout to right.

The Aztecs survived some anxious moments in the ninth when the Rebels loaded the bases off reliever Tre Brown. Myles Denson and Austin Pfeifer reached on consecutive singles bookended by strikeouts. Shortly thereafter, both runners moved up on a wild pitch, while Gamble drew a walk. However, Brown got Austin Kryszczuk to whiff on a 3-2 pitch, securing his second save of the year, as the SDSU bench erupted in jubilation.

Brown was one of seven pitchers utilized by the Scarlet and Black, including Nate Hansen (2-0), who was credited with the victory after tossing a scoreless seventh, where he allowed a leadoff double and a walk but emerged unscathed by inducing two grounders and a flyout.

Ricky Tibbett started for the Aztecs, allowing three runs on seven hits and one walk with two strikeouts in four innings before giving way to Aaron Eden.

Conversely, Gamboa (2-1) was tagged with the loss after yielding five of SDSU’s six runs in the fateful seventh. Starter Josh Sharman went six innings for the visitors, giving up two runs on four hits.

UNLV jumped out to a 3-0 advantage off the bat of Diego Alcaron, who smacked a two-run homer in the first and delivered an RBI single in the second.

The Aztecs finally dented the scoreboard in the third after Carrigg tripled to right and raced home on Miller’s single up the middle.

SDSU narrowed the gap to 3-2 in the fourth when Hendrie crushed his team-leading fourth homer of the year over the fence in left.

However, the Rebels extended the margin to 5-2 with a pair of unearned runs of Eden in the sixth, capitalizing on a throwing error, as Troy Rosenberg and Alarcon brought in Denson and Pfeifer, respectively, on sacrifice flies.

Eight of the nine Aztec position starters recorded at least one hit, including two each by Miller and Carrigg, who also scored a pair of runs along with Hendrie.

On the flip side, UNLV’s Eric Bigani led all players with three hits on the day, while Alarcon (4 RBIs), Denson and Gamble had two apiece.

San Diego State will battle Air Force next weekend in another three-game series March 20-21. The two sides will square off in a doubleheader on Saturday before finishing with a single contest on Sunday.