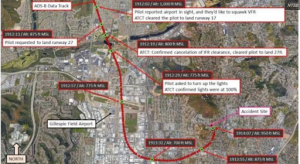 January 11, 2022 (El Cajon) – The National Transportation Safety Board (NTSB) has released a preliminary report on the LearJet that crashed on December 27th into El Cajon’s Bostonia neighborhood, killing all four people aboard.

The report does not identify the cause of the crash, but does reveal that the plane struck powerlines before the crash in overcast, misty weather conditions. The report also indicates that the pilot had overflown the runway at Gillespie Field at a low altitude, was granted permission to land on a different runway, switched from automatic to visual controls and asked that the runway lights be turned up moments before the deadly crash.