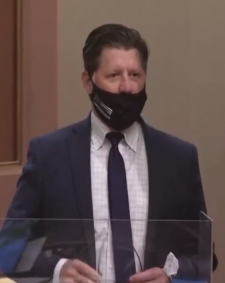 Photo via Facebook: Senator Brian Jones wearing a mask while speaking on the Senate Floor earlier this month

August 26, 2020 (San Diego’s East County)—State Senator Brian Jones (R-Santee) has tested positive for COVID-19. The finding prompted a temporary adjournment of the State Senate just days before the Aug. 31 end of the legislative session, putting the fate of some pending bills in question.

The announcement, made on Senator Jones’ social media sites today, states that he received the news after returning to Sacramento for the end of the legislative session.  The statements indicate he will be taking additional tests to rule out the possibility of a false-positive result.  “In the meantime, he’ll be following CDC and CDPH protocols for those receiving a positive test result,” his Facebook page states.  Those protocols recommend isolating at home while awaiting test results.

The statement does not indicate when or why the Senator was tested, or whether he has had any symptoms. Jones has been wearing a mask when speaking on the Senate floor, including as recently as Monday.