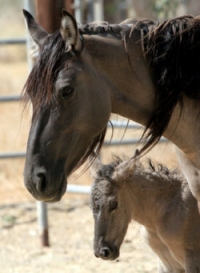 Update July 15:  The property owner has granted a brief stay to allow Coyote Canyon Caballos d'Anza more time to relocate the herd.  The nonprofit group asks public help to contact federal and county elected officials and the Bureau of Land Management to urge that relocation on public lands in San Diego be approved and expedited.  Actions that could be taken include the county adding these wild horses to its protected species list and the BLM approving the horses for relocation to the Beauty Mountain area in northeast San Diego County.

July 14, 2013 (San Diego’s East County) – Plans to restore San Diego’s heritage herd of wild horses to public lands is in peril. An eviction notice has been served on the nonprofit organization that recently found and brought back the last descendants of San Diego’s original wild horses.  Unless the property owner backs down, the horses will be evicted on Monday, July 15.

The Spanish introduced wild horses into San Diego County when the Mission was established in 1769.  Indians later hid the horses away in the mountains of East County. The last of the horses were removed in 2003.

In 2010, a nonprofit organization, Coyote Canyon Caballos d’Anza, was formed to restore the herd to its range lands in northeast San Diego County.  Only four stallions remained. They were brought back from out of state and are being fostered in captivity on private property near Warner Springs.  Fourteen mares that are close genetic relatives have been brought in from Utah and are successfully breeding.

The animals are so rare that they have been declared by the International Equus Trust as a critically endangered species near extinction.

The Coyote Canyon nonprofit wants to restore the herd to federal public lands run by the Bureau of Land Management. But the BLM has ignored requests not only from the nonprofit, but also a unanimous vote by San Diego’s Board of Supervisors asking the BLM to explore relocation of the herd on federal public lands locally in the Beauty Mountain area of northeast San Diego County.

The group also wants the County to add the horses to its list of specially protected species, but thus far this has not been done.

Kathleen Hayden, head of the Coyote Canyon Caballos d’Anza organization, spoke with East County Magazine on Sunday.   She told ECM she will be meeting with the property owner on Monday in hopes of changing his mind. The property owner wants to turn over the land as  mitigation credit for burrowing owl habitat. Hayden told ECM that the horses are compatible with the owls and that the real reason for the eviction is that  a cattleman with grazing leases on public lands wants the horses gone so that he can run cattle in the pasture.

“We don’t have any options at this point,” said Hayden.  She added that her organization has met with Congressman Duncan Hunter and the BLM six weeks ago.

“He gave the BLM the mandate: Find a place on BLM land for these horses,” she said, adding that Coyote Canyon gave suggestions of other BLM land in the County that would qualify. But the BLM has not responded. “The silence is deafening,” Hayden said.

Concerned citizens can contact Congressman Hunter and also Congressman Darrell Issa, who heads up an oversight committee in the House of Representatives, Hayden advised.

Asked what will happen on Monday, July 15 if the property owner does not grant a reprieve from the eviction notice, Hayden replied, “I have no idea.”

For ECM prior coverage of the herd, visit: http://www.eastcountymagazine.org/node/12205

The guy wants to use the land to make money with cattle. Cattle are not eco-friendly and are a business. Hence, the land isn't being used for conservation and shouldn't get the  mitigation credit for burrowing owl habitat. Take him to court using an environmental law based group such as Earthjustice, who take on cases such as these.

My sister adopted a wild horse from Nevada, broke and trained him and now he's the sweetest horse you'll ever find.

I'm sympathetic to the cause, but to expect help from Hunter and Issa? Dream on.